Do not show again [X]
By Liam Cusack   2014 March Neighborhoods 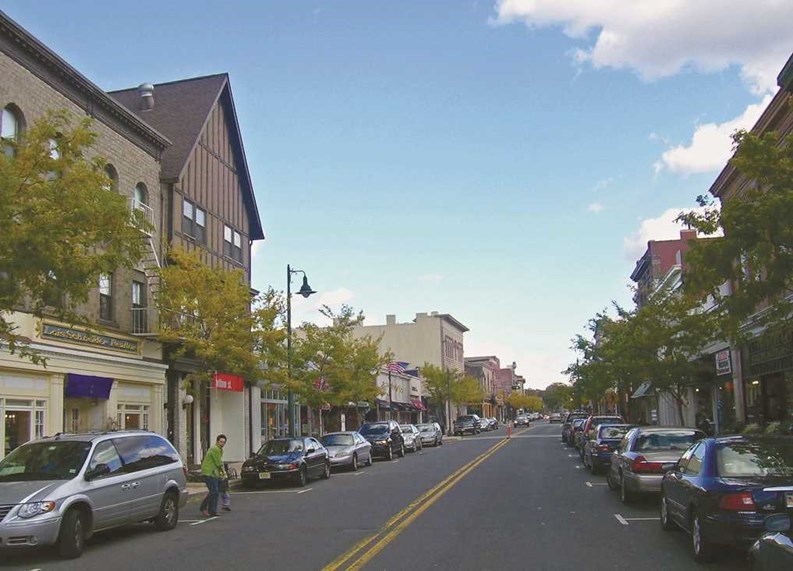 Summit has been described as the Beverly Hills of New Jersey. It is a community comprised of Manhattan's financial elites and known for its real estate, good schools and its New Jersey Transit rail link to Wall Street. The township has long been popular with traders, investment bankers, and money managers. According to the U.S. Census nearly 20% of Summit's residents work in finance and real estate. Where else but in Summit could you have Mad Money financial guru Jim Cramer and former governor Jon Corzine as neighbors?

Summit was purchased from Native Americans on October 28, 1664. Its earliest European settlers came to the area around the year 1710. The original name of Summit was “'Turkey Hill' to distinguish it from the area then known as 'Turkey,” New Providence's original name until 1759.

During the Revolutionary War period, Summit was known as "Beacon Hill," because bonfire beacons were lit on an eastern ridge in Summit to warn the New Jersey militiamen of approaching British troops.

During the late 18th century period the area was then called the "Heights over Springfield,” and was considered a part of New Providence. During this time, Summit was part of Springfield Township, which eventually broke up into separate municipalities. Eventually only Summit and New Providence remained joined.

Lord Chancellor James Kent, a Chancellor of New York State and author of Commentaries on American Law, retired to this area in 1837 in a house he called Summit Lodge (perhaps a namesake of the town) on what is now called Kent Place Boulevard. He lived there until 1847. Today, the lodge is part of a large mansion, at 50 Kent Place Boulevard, opposite Kent Place School. The name’s origin may also refer to its position atop the Second Watchung Mountain, a range of hilly ridges lying parallel to each other in that area of the state.

In 1837, the Morris and Essex Railroad, which became the Delaware, Lackawanna and Western Railroad and is now the New Jersey Transit's Morris and Essex Lines, was built over a hill in what was then called "The Summit,” a name later shortened to Summit. The railroad allowed Summit to outgrow neighboring New Providence, which didn't have a train station. In 1868, a hotel named "The Summit House" burned beside the railroad. In 1869, Summit and New Providence separated and the Summit area was incorporated as the "Township of Summit."

An Enclave for the Wealthy

After being incorporated, the area began shifting from farmland to wealthy estates. In 1892, renowned architect C. Abbott French cleared away a crest of a "Summit Ridge," removing "an impenetrable tangle of wild vines ... and myriads of rattlesnakes." The area was cleared to build a house with a view of New York City, The Times Building, and the Brooklyn Bridge. Today, Summit, known formally as the City of Summit, was incorporated on April 11, 1899.

In the 19th century, Summit served as a nearby getaway spot for wealthy residents of New York City in search of fresh air. Weekenders or summer vacationers would reach Summit by train and relax at large hotels and smaller inns and guest houses. Calvary Episcopal Church was built in 1894-95; the New York Times called it a "handsome new house of worship.”

From Silk to a Certain Ilk

Silk weaving thrived as an industry in the late 19th century, but declined in the early decades of the 20th century; in 1915, there was a strike at the Summit Silk Company on Weaver Street. In the early 20th century, construction was continuous. In1909, one report suggested at least 40 residences were being built (some with stables) with costs varying from $4,500 to $45,000, making it, "one of the greatest periods of building activity this place, the Hill City, had known."

A new railway was constructed from what was then-called New Orange. The Rahway Valley Railroad connected Summit with the Delaware, Lackawanna and Western Railroad (DL&W). In the early 20th century, both freight and passenger service were offered by this line (now currently out of service). A trolley line called the Morris County Traction Company, once ran a passenger trolley through Summit to/from Newark and Morris County, in the early part of the 20th century. Broad Street in Summit was designed and built for the trolley, which is why it is wider and straighter than most streets in the city. Portions of the rails could still be seen on it as late as the 1980s.

Following World War II, the city experienced a great building boom, as living outside New York City and commuting to work became more common and the population of New Jersey grew. At this point, Summit took on its suburban character of tree lined streets and architect-designed houses that it is known for today.

As a side note, The Velvet Underground played their first paid concert at a Summit High School quite prom.

Real estate, needless to say, is still quite expensive. Three years ago, the median house price was about $655,000, (today it could go for six figures) and like the rest of New Jersey, property taxes are sky high. According to Trulia.com, the median sales price for homes in Summit for November 2013 to February 2014 was $800,000 based on 29 home sales.

Compared to the same period one year ago, the median home sales price increased 26.4%, or $167,000, and the number of home sales decreased 27.5%. There are currently 63 resale and new homes in Summit on Trulia, including 29 homes in the pre-foreclosure, auction, or bank-owned stages of the foreclosure process. The average listing price for homes for sale in Summit was $1,070,026 for the week ending February 26th, which represents a decrease of 0.2%, or $1,840, compared to the prior week.

Baseball great Willie Wilson, a former Summit graduate returned to Summit High School in 2005. Wilson said: "To me, Summit is a special place ... It's where it all began and I have great memories. This is where I want to help kids and youth baseball, and I want my own son and daughter to come and help me create something here."

Among other notables, Academy Award-winning actress Meryl Streep was born in Summit, as were New York Giants quarterback Dave Brown, former NFL player Joe Porter, who played for the Raiders, Browns and Packers, and tennis player Bill Larned. If you’re thinking of a place to call home, Summit might just be at the top of your list.