Do not show again [X]
By Debra A. Estock   2016 April Neighborhoods 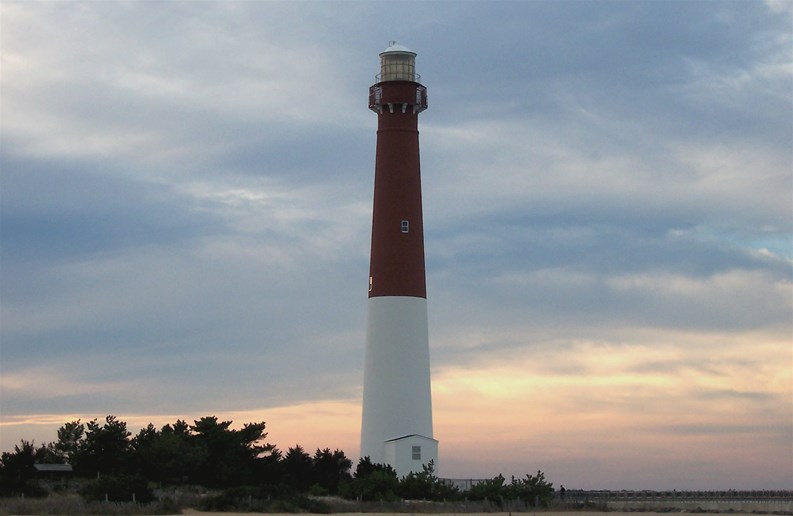 The island, 75 miles south of New York City, is about 18 miles long, and includes three miles of a nature reserve at its southern tip. LBI is about a half-mile wide at its widest part in Ship Bottom, and spans a fifth of a mile at its narrowest point in Harvey Cedars, site of a once-famous resort hotel.

Although the year-round population is about 20,000, almost 130,000 vacationers descend on the island each summer.

Continuously settled since about 1690, the island has traditionally been a prime destination for hunters and fishermen. Barnegat Inlet, to the north of the island, was an important trade route for freight shipments and whaling from the 17th century through the 20th century. Due to the Inlet's importance and turbulent waters, a lighthouse tower was built in 1835 to guide ships through the area. The lighthouse, however, proved inadequate as a beacon, as it was constantly being mistaken for another passing ship because the light was fixed.

Erosion problems destroyed the tower in 1857, two years before the current Barnegat Lighthouse was completed in 1859, flashing at each point of the compass every 10 seconds. It was constructed by the United States Army Corps of Engineers under the supervision of George Gordon Meade, who himself was famous for leading the Union forces to victory four years later during the Civil War at the Battle of Gettysburg. The United States Life-Saving Service built Station #17 in Barnegat Light (then known as Brownsville) around 1872, and it continues today as an official United States Coast Guard station. The 172-foot-tall structure, nicknamed “Old Barney” is the second tallest lighthouse in the country.

The development of tourism led to the building of a railroad connection between the mainland and the island, which was completed to Barnegat City in 1886. Everyone these days knows the sensationalistic Peter Benchley book Jaws, and the sequence of Steven Spielberg movies that followed. But did you know it was partly inspired by the actual Jersey Shore shark attacks of 1916. A series of attacks took place between July 1 and July 12, 1916, in which four people were killed and one injured. The first fatality took place in Beach Haven, when a shark bit and killed 25-year-old University of Pennsylvania student Charles Epting Vansant, who was vacationing at the Engleside Hotel with his family. Shortly thereafter, a 27-year-old hotel worker Charles Bruder was killed in Spring Lake and eleven-year-old Lester Stillwell and his rescuer Watson Stanley Fisher, 24, also died during a shark attack in Matawan Creek. The attacks were allegedly attributed to a great white shark although in later years, researchers think it may have been a bull shark. The national media descended on the Jersey Shore and created a panic unrivaled in American history.

The area is also known for violent weather. A severe winter storm in 1920 destroyed most of the beaches along the island, several hotels, and also reopened a new inlet in Holgate. A 1923 storm also affected tourism on the island, and resulted in officials discontinuing train service to Barnegat City between 1923 and 1926. In 1935, the railroad bridge to the mainland washed out, leaving the entire island without rail service.

Storms have even split the island in two, with the division occurring at the island's narrowest point in Harvey Cedars. Most famous of such storms, however, was the Ash Wednesday Storm of 1962, which split Long Beach Island into numerous pieces and nearly destroyed the island in its entirety. The storm caused the destroyer USS Monssen to run aground in Beach Haven Inlet, Long Beach Township. This led to the building of a sturdier Route 72 Causeway after automobile and railroad bridges on the island were washed out.

While Hurricane Sandy roared up the Eastern Seaboard in late October 2012, hitting New York City, Long Island, New Jersey and Connecticut, portions of Long Beach Island also suffered significant damage. Residents were evacuated and portions of the island were severely flooded, with the ocean meeting the bay in some isolated spots. Streets were covered with up to four feet of sand and several homes along the ocean and bayfront communities were damaged by the nine-foot storm surge and 18-foot seas that pounded the barrier island. It wasn’t until mid-December when power was restored and many businesses reopened, that life had somewhat returned to normal for Long Beach Islanders.

The original Ron Jon Surf Shop was located in Ship Bottom and its current building is situated along Route 72, a large four level store that offers surf, skate and beach products for men, women, and children. In Beach Haven, dreams come true at the Fantasy Island Amusement Park: the only island location with standard-fare amusement rides (including a classically-designed carousel). Fantasy Island offers rides, games, food, live entertainment, and a family style casino arcade; the amusement park is currently celebrating its 30th year. Entertainment, admission, and parking are free. Lucille’s Oh Fudge! Candies has a large salt water taffy display in front of the shop, a candy which was first created in nearby Atlantic City. Thundering Surf Water Park, the island's only water park, offers fun for all ages. With six water slides, a kid’s area, a lazy river, miniature golf, and a Flow House, the water park is a popular attraction for families.

A Haven for Celebrities

The lower-density northern half of the island, Loveladies, North Beach, and the surrounding neighborhoods, are home to an assortment of large-scale waterfront homes—many of which attract visitors and vacationing celebrities. Most keep their whereabouts low-key. On the southern end, especially in Beach Haven, you will find many historic and elegant Victorian homes that have survived the many storms. The south end contains significantly more commercial zoning, which generally decreases north of the bridge. Year-round residents and business operations are more common toward the southern end of the island, particularly in the larger boroughs of Beach Haven and Ship Bottom. Celebrities like Jon Stewart, Ray Romano, radio personality Robin Quivers and Jerseyite Jon Bon Jovi are known to be frequent summer visitors and homeowners on the island.

Debra A. Estock is managing editor of The New Jersey Cooperator.