Do not show again [X]
By Debra A. Estock   2014 October Neighborhoods 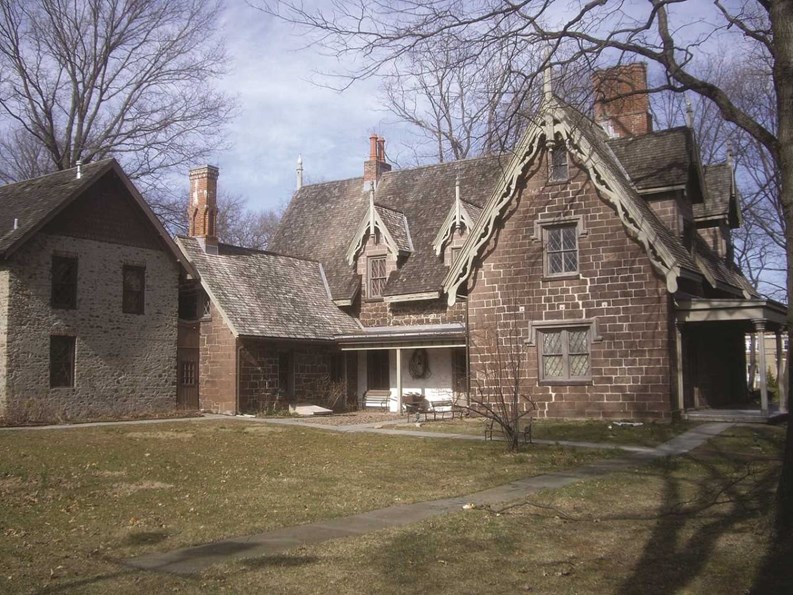 Well, most accounts anyway trace the origin of Ho-Ho-Kus to the Chihohokies Indian tribe or to the word “hohokes,” which means whistle of the wind against the trees. Or it could refer to a Native American word for running water, named so because of the brook running through the town.

But according to the town’s official website, the most likely origin is a contraction of the Delaware or Lenni Lenape Indian term "Mah-Ho-Ho-Kus" (or "Mehokhokus"), meaning "the red cedar.”

But whatever definition you choose, the hamlet, with its stately homes, top-notch schools, tree-lined streets and small town feel along busy Route 17, received the no. 1 town ranking in the 2011 New Jersey Monthly Top Towns survey. The 4,078 residents benefit by the short commute into Manhattan, low crime rate and a fairly low tax rate for New Jersey, which has one of the highest property tax rates in the country.

What’s in a Name?

A constant source of confusion has been the manner in which the borough's name has been spelled, with each syllable capitalized and separated by hyphens. The confusion had been exacerbated by the existence of Hohokus Township, which comprised the area of present-day Ho-Ho-Kus and other surrounding communities, yet was spelled without the multiple capitalization or the hyphens. Ho-Ho-Kus is served by interchange 168 on the Garden State Parkway which spells the municipality as "Hohokus" on its exit signing.

Grammarians aside, a few theories have surfaced for the hyphens and capitalization. One is that it was intended to differentiate between the borough and Hohokus Township, which was formed on April 9, 1849, and continued to exist until November 7, 1944, when a referendum was passed changing the name to present-day Mahwah. Another explanation was that it was meant to avoid confusion by postal clerks to stop mail being sent to Hoboken. Its name is unique, however, as no other community in the country has the unusual name with the hyphens.

According to the borough website, many of the early settlers who lived in the new Paramus tract around the early 1700s, which included Ho-Ho-Kus, were Dutch, English and Polish immigrants.

The website states: “Although there are family histories and church documentation about early pioneers, one of the earliest written notices that specifically mentions Ho-Ho-Kus is the 1698 Van Emburgh deed. It records the purchase, for thirty-two pounds ten shillings, of half of a 500 acre patent of land by David Provoast and Johannes Van Inburgh from Issac Kingsland to whom it had been granted by the Proprietors of East New Jersey.”

During the period of the late 1700’s homes were constructed on the east and west banks of the Saddle River, and for the next one hundred years around 19 impressive homes appeared on the landscape. Most of these homes are still standing today and several qualify and are listed on the National Register of Historic Homes.

Despite the construction through the years, though, growth in the town was extremely slow as by the 2000 Census, only 4,060 residents called Ho-Ho-Kus home.

Early recreational attractions included the 70-acre Sylvan Lake, which provided ice skating, canoeing and swimming to residents and a burgeoning tourist population. Unfortunately in 1882, the lake’s dam broke taking the summer tourism industry and the recreational activity along with it.

While population remained sparse, the website reports that Ho-Ho-Kus residents found ways to keep themselves entertained. The 1870's brought with it the Ho-Ho-Kus Race Track, the official account said. “In one form or another the track continued to exist and be used until the late 1930's. There were the traditional livestock exhibits, competitions and the many displays of wagons and machinery. The County Fair was always the event of the year. The last Fair was held in 1932 and the last horse races a year later. Exciting entertainment was provided by the Ho-Ho-Kus Driving Club which invaded the track in 1919 and remained popular until a fatal day, July 4, 1938 when two race cars plunged into the infield killing two spectators and injuring many others. The exhilaration of racing was stopped. The land sold in 1950 and 1951 for a housing development.”

Today Ho-Ho-Kus has a very well established school and recreational program for the town’s young people and parks and nature walks can be found throughout the area. There are six parks, the largest of which is the 15-acre East Park off East Saddle River Road and Hollywood Avenue. It includes picnic facilities, walking trails and a section of the Saddle River, which residents use for trout fishing.

Ho-Ho-Kus is known for its small town feel and its development has been measured since 1927, when Howard Cheel, a builder bought 13 acres of the original Ackerman farm and built the borough’s first planned residential subdivision. The property extended north and west from the intersection of Hollywood Avenue and Sheridan Avenue. The first six homes were built and sold in 1929 and today, the Cheelcroft area is an exclusive enclave of stately Tudor homes, consisting of about 100 acres. Several other housing developments came along in the 1950s.

One centerpiece of the downtown that remains today is the 1790 Zabriskie House at the corner of Franklin Turnpike and Sheridan Avenue. Transformed from a residence to an inn, this venue has undergone several name changes and renovations over the years. Today it is the Ho-Ho-Kus Inn after new owners purchased the lease in 2007.

Another nationally landmarked site is The Hermitage, a picturesque, 14-room Gothic revival Victorian home replete with gingerbread trim and verandas in keeping with the construction of that era. The historic house incorporates a stone house that was a Revolutionary War headquarters of General George Washington and the site of Aaron Burr’s marriage to Theodosia Prevost, one of the home’s original owners. The house is now operated by the state as an interpretive museum.

The community’s housing stock largely consists of single-family homes but a few townhouse and condo communities have cropped up. Small apartments sit above stores in the business district and the 24-unit Normandy Court condominium complex can be found off West Saddle River Road, where prices range from about $375,000 for some three-bedroom units, to upwards of $900,000 and more for some three and four-bedroom units. Single family homes range from $450,000 to nearly $3 million. Rentals range from $1,800 to $3,000.

Ho-Ho-Kus’s business district includes two pharmacies, a handful of high-end restaurants (including the Sicilian Sun Ristorante, which the late President Richard Nixon frequented when he lived in nearby Saddle River), and a few antique stores, banks and gift shops, among other businesses. While not having a huge corporate tax base, the town’s affluent residents support the municipality. New Jersey Monthly magazine named Ho-Ho-Kus the eighth wealthiest community in New Jersey overall, with a median household income of $157,656.

Quaint charm and easy proximity of this suburban enclave to the Big Apple make Ho-Ho-Kus a place that many urbanites will want to call home.

Debra A. Estock is managing editor of The New Jersey Cooperator.