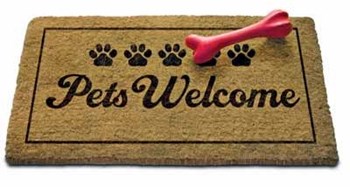 Even as condos and co-ops around the Northeast have loosened pet restrictions to increase marketability during the recession, not all New Jersey buildings and HOAs have jumped on the bandwagon.

Co-ops, most of which do not have strong marketing concerns, have continued to ban or place heavy restrictions on animals (principally dogs) out of concerns over nuisance barking, property damage and dog bites.

This is in contrast with condos, where pet policies are developing along two diverging paths. Newer condos, which need to appeal to a wide segment of buyers, have generally thrown out the welcome mat for dogs. But in some older condos, tighter controls on animals have been put in place within the past year, according to Linda Cohen Wassong, a realtor at The Corcoran Group in New York City, who specializes in finding housing for pet owners. “In the past, condos had always been friendly to pets, except if you were renting. But now there are restrictions at some of them,” she says.

More Dogs Than Ever

While some buildings are putting dogs on a tighter leash, a combination of market forces and sheer doggy demographics are working against the restrictions, say industry pros. As dog ownership has increased, new developments, particularly condos, have become more dog-friendly for economic reasons.

“Landlords realize that dogs are not causing the physical damage that a lot of people said they were," says Bob Marino, a dog ownership advocate. "A dog walking in a carpeted hallway causes no more damage than the parent with a baby carriage—probably less damage. And dogs, except when they're very old, rarely urinate or defecate in a hallway or lobby area. Landlords also realize that not only are you getting more prospective renters and buyers with relaxed pet rules, but you can charge them more money for rent. You charge them a $30 a month fee.”

While many newer condos are becoming pet-friendly, Wassong says some older condos are going the other way. “I’m starting to see things that I’ve never seen before in terms of restrictions,” she says. “I’m seeing more [restrictions] about smaller dogs, and when I say smaller, I’m talking 16 pounds and under.” Wassong says she is also seeing restrictions on specific breeds, limits on the overall number of pets, and pets allowed only on a case-by-case basis. The net effect of the new restrictions is that it is more difficult to pair potential purchasers with pet-friendly properties, says Wassong.

"Generally speaking, an outright ban on pets is enforceable if that ban is set forth in either that condominium's bylaws or master deed," says David Byrne, an attorney shareholder with the Lawrenceville-based law firm of Stark & Stark. "In turn, should a condominium look to enact an outright ban where one does not already exist, it's best practice to seek to place that ban into either the bylaws or master deed. Any pet-related rules—typically—aside from an outright ban (i.e., leashes, registration fees, noise) can be enacted by the condominium's board of trustees, subject to the bylaws of that condominium and the New Jersey's Condominium Act's provision regarding open board meetings and binding decisions."

On the legal front, issues of dog ownership in the tri-state area have occasionally been tricky. Last November for example, an appeals court in New York City ruled against a condominium that had tried to kick out a Yorkshire terrier that had been living there before a pet ban was enacted in 2009. The appellate judges ruled that, while the condominium board had voted in favor of the ban, it was not enforceable because it had not been written into the bylaws and approved by 80 percent of the members. The condominium spent $100,000 trying to evict the 3-1/2 pound dog, according to the dog-owner’s attorney.

According to John S. Lord, Jr., a partner with the law firm of Foley & Lardner, LLP in Orlando, "Some pets are prescribed by doctors as true service animals for their patients, even in nontraditional roles. So in addition to the traditional guide dog for the sight-impaired, you see service animals who perform tasks like helping a patient open medicine or keep track of when to take meds. Also, some guide animals help keep people away from dangers in the home or elsewhere. They could help fetch a phone in an emergency or even be trained to call 911 themselves."

These dogs are also becoming more and more prevalent for use in mental health and wellness. If someone is blind or in a wheelchair, the purpose of their service dog is fairly obvious, but there are many other disabilities covered under the law that are less visible.

“If a person has depression or anxiety and says, ‘I need this dog to live my life normally,’ that’s sort of where it gets tricky,” says Matthew Gaines, an attorney at the Massachusetts-based Marcus, Errico, Emmer & Brooks, PC, a nationally-recognized firm specializing in condo law. “Their disability may not be obvious, and you need to handle [the request] a little more carefully. We advise boards to take all requests very seriously,” says Gaines. A condo or co-op board does not want to be on the receiving end of a discrimination suit. “The consequences can be harsh on both a state and federal level.”

"The Fair Housing Act Amendments in 1988 amended the Fair Housing Act to include protections for family status and also for disability," Lord adds. "The disability protections require covered condos to provide reasonable accommodations for people with disabilities. Waiving no-pets rules to allow a person with a disability to have the assistance of a service or comfort animal may constitute a reasonable accommodation. Courts have found that condo associations must be flexible in basing decisions about accommodations on the needs of a particular resident. So, condo associations need to be careful when denying requests for even comfort animals, when the request comes from someone with a disability. Condo owners are catching on to this law, and more and more are requesting 'reasonable accommodation' to allow pets. Boards are going to see more an more claims."

That said, there are questions a board can ask. With such requests, a doctor or social worker should fill out a form detailing the individual’s disability, explaining why a companion dog is a necessity, and why other treatment would not be an adequate substitute.

As the benefits of using therapy dogs to help everyone from autistic children to veterans are researched, such requests for waivers are becoming more common. “In the last year or so, it seems like more requests are coming in,” says Gaines.

Regardless of regional or local trends, it is the co-op or the condo board that has the most effect on dog policy at a building. "Condos can certainly require that pet owners clean up after their pets, and that they keep them groomed and clean," says Lord. "They can require owners to use certain areas for their pets too, and certain places in the country—Miami, for example—have laws outlawing breeds like pit bulls."

"There are a number of general rules that can help keep things calm," agrees Melvyn Tarnopol, a partner with the law firm of Fox Rothschild LLP in Atlantic City. "Weight limits are useful to the extent that other unit owners can be afraid of large dogs. Condominiums can adopt leash rules so that dogs will not bother other unit owners, particularly in common areas such as elevators. Condos often limit the number of dogs or cats to two per household, to encourage cleanliness. Condominiums also need to set up procedures whereby neighbors can complain about noisy animals and the pets are removed if their owners cannot control them. Certainly, making owners responsible for the behavior of their animals is a reasonable approach. Finally, unit owners can be required to sign pet applications that provide that the owner shall be liable for any damage caused by the pet."

Changing existing pet rules in an HOA is more complicated than merely taking a vote, even if a majority of residents support pet allowing pet ownership. "The answers to these questions depends on what the condominium constituent documents provide,” says Tarnopol. “For example, if the master deed contains the restriction on pets, then that restriction can be changed only by the procedures provided for in the master deed, which likely requires a vote of the unit owners. If the pet restrictions are contained, instead, in the rules and regulations, then they can be changed by a vote of the board."

"And," adds Byrne, "In New Jersey, condos and HOAs must make alternative dispute resolution (ADR) available in relation to housing-related disputes. Sometimes condominiums launch into enforcement actions and/or threatening letters without considering this requirement. This is troubling, not only because this ADR-related requirement has been the law now for some time, but because ADR will often resolve a pet-related dispute before it gets out of hand and/or begins to generate legal expenses. Additionally, condominiums often threaten or impose fines for pet-related violations without first confirming that they can actually, legally do so. Remember, New Jersey's Condominium Act allows condominiums to levy fines only if that right is set forth in either said condominium's bylaws or master deed."

For her part, Wassong believes that changing condo boards may be behind some of the newly-enacted pet restrictions at established condos. “I think boards themselves change," she says. "New people come onto boards, old people leave. But maybe there’s more people going onto boards who don’t have dogs.”

The process can work in reverse, with pro-dog board members bringing more dog-friendly policies to buildings. Even when pro-pet board candidates lose, the professionals point out that they set the stage for pet policies to become a key issue in future elections.