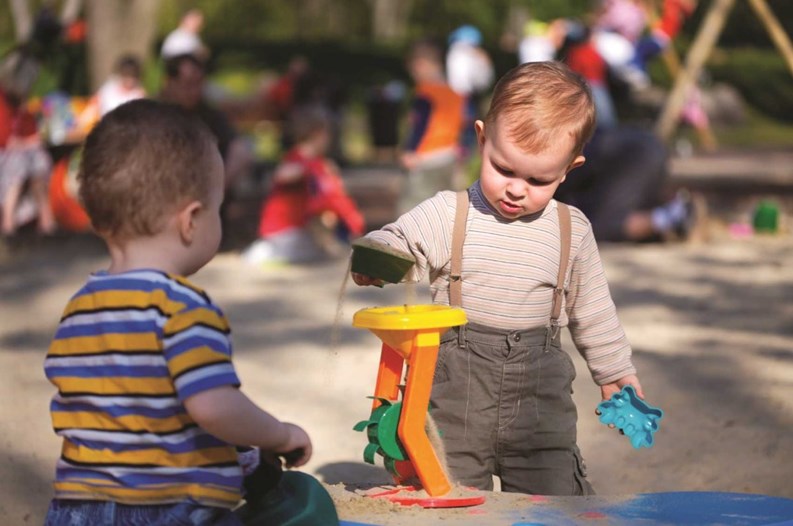 All parents crave space for their kids, a place for them to play and romp and run. That’s why more and more families are intent on finding condo communities that offer something for the whole family, from playgrounds to swimming pools to playdate-friendly guest policies. The number of condo associations offering these kinds of amenities, however, remains relatively select. Why are these amenities so rare, and does it have an impact on family living?

Finding What Kids and Parents Need

For most families—especially young families—the first thing they search for when it comes to a place to live is a sense of community. “They’re looking for other families,” says Marisa Kochnover, director of operations for the online community CityMommy.com (northjersey.citymommy.com) for northern New Jersey and the “gold coast” area. “If you’re thinking of starting a family or have one already, you gravitate toward other families,” she says. “You’re looking for other moms with strollers.”

Especially for New Jersey families, that promise of the suburban lifestyle is a big draw. “A lot of people move out of Manhattan in order to have other families nearby,” Kochnover continues. “They’ve been missing that backyard. So when you buy a condo with a pool or a playground, that’s a huge plus.”

So far however, those family-friendly amenities are not emerging en masse. “Here on the Gold Coast, I’m finding that there’s very little to do for kids, even though the area is densely-populated with families,” Kochnover says. “You would hope that building owners and developers would do a little bit of research to understand the community that they’re building in and try and meet some of those needs.”

Perhaps part of the problem rests with the fact that most new condo construction these days is geared toward the adult community, as Baby Boomers hit retirement age and are looking for new places to live and socialize. Some adult communities, though, are finding ways to merge the needs of seniors and their younger family members.

“You see policies now welcoming grandchildren,” says Diane Dangler, a property manager and owner of DHD Management Co. in Ocean Port. Kids who previously may have been shooed away from guesthouses and swimming pools now have access. “You’ll see residents going to the pool with their grandkids, and they just love it.” One community, she says, built a swimming pool just for the kids.

Kochnover suggests that a number of issues for parents actually could be solved with similarly relaxed rules on visiting. “In a lot of places, you’ll find that guest policies are strict,” Kochnover says. “People want to have playgroups but they can’t because of the guest policies. It’s hard. You end up having to drive 30 minutes just to do something with your kids.”

Many condo communities want to try to meet the needs of families, but a number of things weigh on their decisions to add those types of amenities. “Liability, maintenance and upkeep,” says Dangler. “It’s a monetary commitment.”

Play areas and tot toys need special attention from grounds crews. Special mulch might need to be used to reduce allergy attacks, chemical exposure, and scrapes and scratches for kids. Playground equipment is subject to stricter regulation than ever before with concerns about paint, chemicals and safety. “The board has to be aware that equipment has to be maintained and looked at every single week,” Dangler says. And when it comes to upgrading existing spaces, those pieces need “to be replaced with new equipment” that meets contemporary safety standards. There are also city regulations to follow including rules on how much space can be devoted to playground equipment and how many pieces can be used within that space. Creating a new play area may require a good working relationship with the city government.

Liability is a definite concern. “Pools and playgrounds, tennis courts and other such amenities do present liability issues for common-interest communities,” says Judy Cook, a property manager, licensed real estate broker and consultant with Cook & Company, based in Reno, Nevada.

“Insurance premiums typically reflect the increased liability. In my own experience, many associations opt to do without or eliminate those amenities.”

Sometimes lack of use can be a problem as well. Cook says she has seen HOAs eliminate amenities “not only because of the higher insurance rates, but because the amenities are rarely used by the owners and tenants, oddly enough,” she says. “I’m not sure what that is, but many times, I’ve seen associations close their pools due primarily, to lack of use compared to cost of upkeep and insurance.”

Another concern is who will be using the play area. For many residents, there is a reluctance to install basketball hoops or swings or other play equipment because it can become a hangout for teenagers or loiterers, driving away the very families and small children for whom the space was originally built.

The cost of play areas can be a concern for families, too. “I would love to see more,” Kochnover says. “But sometimes it’s hard because you don’t want to pay for it in the maintenance fee yet at the same time you want the amenities.” Knowing that what you get for your money is high quality helps. “If my maintenance is going to be higher than at the place down the street, how will it benefit my family?”

Money can be a factor in creating other activities for families as well, whether it’s movie night or game night or something social to bring people together. Even though these activities cost less, say, than adding a swing set, it is still an expense.

“The biggest concern to most associations with whom I’ve worked is the dollar,” Cook says. “All of these activities cost money—someone needs to be paid to host the parties, etc.  Most associations are on really tight budgets. Extras just don’t fit into the overall picture.”

Don’t Give Up Hope, Kids

The news, however, is not all grim for kids and parents looking for a good family time. A number of communities are working to fill the void in family-friendly amenities. Which is a good thing because, as Kochnover says, sometimes that can be the biggest selling point for parents. “For newlyweds or people just thinking about starting a family, then no, it probably wouldn’t influence their home buying decisions,” she says. “But for people who already have kids, it would sway the decision. I know it would sway mine, absolutely.”

A new development in Edgewater called Peninsula at City Place is advertising their kid-friendly play space on the front page of their website, touting it alongside their upscale residents’ lounge and lobby area. It sends a message, certainly, that this is a priority when it comes to enticing potential buyers.

Dangler cites a condo community in Eatontown that has recently installed two new play areas for their smallest residents. “We bought little tot lots for the kids,” she says. “They were expensive, but they’re really loved and used by the kids.” The condo community built the area in response to the needs of its residents. In a lot of communities, Dangler says, “The biggest complaint is that there’s no place for the kids to play. They certainly can’t play in the streets. Not having something like this cuts out a large percentage of residents.”

According to Dangler, the key to success was planning and finding the right people with whom to work. “We worked closely with the town,” she says. And the contractor they found to install the pieces was recommended by the town and had done work for the city parks, so Dangler says they knew they were getting good quality. They also worked with a manufacturer who had significant experience in finding the right toys and pieces for the right-sized area and the right age groups. “We were lucky to work with Game Time and Whirl Construction,” she says. “They did a wonderful job.”

Installing those play areas took time and their upkeep requires diligence and the attention of staff, so it has been an investment—but one Dangler says has paid off. When planning something like this, she says it’s important to pay attention to the demographics of the community for which the space is being built. “You have to gear it toward what you have,” she says. “If it’s mostly toddlers in the community, you’ll want a playground. If it’s teenagers, you might want something else.”

To date, “Parent response has been great,” Dangler says. “They tell us how nice it is to have this little park.” For an increasing number of parents and families, finding those extras for their kids is the difference between having a house and a home. And despite the cost and the liability, it looks like more and more communities are answering that call, stepping forward to meet the needs of its youngest residents—a welcome change for moms and dads who always dreamed of white picket fences and the sounds of children playing in the yard.

Liz Lent is a freelance writer, teacher and a frequent contributor to theNew Jersey Cooperator.